When I decided I wanted to do this series, I always knew what the first post would be.

Once a upon a time, when I was a little girl, I found reading boring. It was hard work and not fun at all. 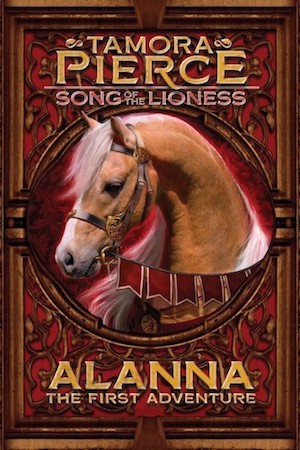 I picked up Alanna: The First Adventure by Tamora Pierce on one of the regular school visits to a library.

I was eleven years old and after reading that book, I’ve been a reader and later it lead me down the writing path.

Alanna was great, both the character and the book. It is a young adult book, at least that is where I would put it, especially with the later books seeing Alanna go from 10-11 years old to 18+. (The series is called Song of the Lioness.)

I loved the book because it fulfilled my biggest fantasies at that age: being a knight in training (aka a page), a girl, and having great magic.

I don’t want to spoil the books even though they are decades old. Let’s just say as the series goes on, it fulfilled more fantasies and went in direction I didn’t expect.

This isn’t Tamora Pierce’s best book (or series) in my opinion, but it was the book that made me a reader, so how could I not love it?

I’ve reread it many times. I read a lot of Tamora Pierce’s work and I’ll feature more of them in this series in the future.

Also, the rest of the series is also great; the fourth book is my favorite, but it is best when read after reading the first three.

Felicia Fredlund writes in multiple genres and for both adults and young adults. Her quest is to entertain, offering her readers exciting adventures and emotional … END_OF_DOCUMENT_TOKEN_TO_BE_REPLACED