I’ve been a little slow in my announcement of my publications, so I have several exciting projects to tell you about. 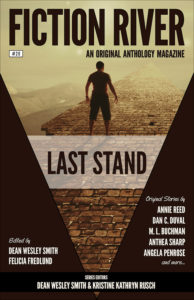 In November last year, Fiction River: Last Stand was released with my story “Magic and Sacrifice”. I co-edited that anthology with Dean Wesley Smith and it turned out extremely well. I am so happy with all the stories; they are all great. They all show case different kinds of last stands.

My story takes a lot of inspiration from the battle at Thermopylae. So few spartans, so many enemies. A classic last stand. I narrowed it down to one woman and one man fighting to save their country from invasion of a neighboring country. A high fantasy tale.

I highly recommend every story in this anthology. Dean and I had a blast putting this together. We had so many quality stories to choose from, a real embarrassment of riches. We get to share it in a volume I’m very proud of.

Buy it here (a link that leads you to many of the places the volume is for sale at).

My story is called “The Game of Time” and it is from the point of view of a book, the Book of Time to be more exact. This is also a high fantasy tale and the start of a new fantasy world. The world/series doesn’t have a name yet, but it will.

The story is about what happens when the Book of Time makes a mistake and all the consequences that follow.

There are some really great stories in this volume (beside my own, of course ^_~). You don’t even have to trust just me. Tangent Online did a review of the volume. This is what they said about my story:

“The story is interesting and well written…”  —Tangent Online

Just like above, I have a universal link where you can find most retailers to buy Fiction River: No Humans Allowed. 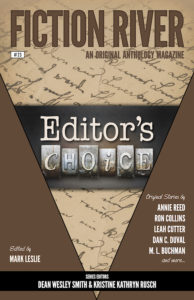 The last news for today are about another Fiction River anthology that will release at the end of June (so in a couple of days!). This one is called Editor’s Choice and is edited by Mark Leslie. And because publishing isn’t always straight forward, this is actually the first story I sold to Fiction River.

The story is called “The Blood is on the Wall” and is a military horror story. Quite different in some ways from what I normally write. Although since my fantasy tend towards the darker side, perhaps not that different.

It is about a woman who works as a UN soldier while vampires are trying to take over the world. When the story starts the vampires are precariously close to taking over the city where the soldier’s sisters live.

And once again I’ve read more or less all the stories in this volume too and I can’t recommend it enough. I actually recommend all Fiction River volumes if you enjoy quality short fiction and read widely across all genres. If you mostly read one or two genres, comment which ones below and I’ll tell you which volumes has mostly/only those genres.

Fiction River: Editor’s Choice will be available at all the common book retailers in a couple of days.

Felicia Fredlund writes in multiple genres and for both adults and young adults. Her quest is to entertain, offering her readers exciting adventures and emotional … END_OF_DOCUMENT_TOKEN_TO_BE_REPLACED